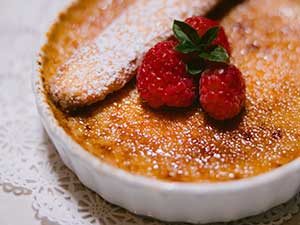 – or Crème Brulee and drink Pouilly Fuisse, Mouton Rothschild, Chateauneuf du Pape and enjoy life without checking the bathroom scales each morning! The French Paradox is making news still – and our own Chef Richard Blondin is frequently quoted for his views on the subject! (The Columbus Dispatch, “Why the French Aren’t Fat, Healthful habits keep population lean despite rich cuisine”. Published: Sunday, January 23, 2005) Richard Blondin trained under famed Chef Paul Bocuse in Lyon, France. As Chef Blondin explains, the French savour their food – they are passionate about their food. The French count flavours, not calories.

According to established lore and several new books (the latest is French Women Don’t Get Fat by Mirielle Guiliano,) the ultimate diet craze is to take a lesson from the French.

Chef Richard prepares his menus in the tradition of Lyon – with passion, with time and with the freshest ingredients available. As do the local restauranteurs in Lyon, Richard works with local purveyors to procure farm raised ostrich and elk, and fresh berries and tomatoes from orchards in Ohio.

The French value quality over quantity.

The French dine on one meal at a time, not snacking their way through the afternoon or evening.

I have discovered that there is romance in food when romance has disappeared from everywhere else.
– Ernest Hemingway

Ah, but the French have always had a romance with food!
Food is to be savored – meals enjoyed and never rushed.

We invite you to linger over your dinner at The Refectory and Dine Well.